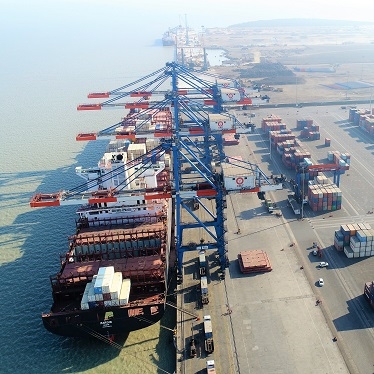 Kandla International Container Terminal (KICT) is one of the flagship container terminals of J M Baxi Group established in the year 2017.

The concession agreement for the terminal was signed between Deendayal Port Trust and J M Baxi Group on 29th February 2016, for the Development, Operation and Maintenance of Container Terminal at Berth Nos. 11 and 12 at Kandla Port on PPP Mode. The physical site was handed over to J M Baxi Group on 24th September 2016 and the site was ready by January 2017. On the very same month on 28th of January 2017, KICT handled its first vessel MV. Gibe 050WB of Ethiopian shipping Line.

Kandla International Container Terminal (KICT) is the closest terminal to the western and the northern hinterlands of the country due to its unique positioning on Kandla Creek in the Gulf of Kachchh. With this there is direct saving in first leg road bridging for the transporters which is reduced by 75 kms, roundtrip of 150 kms thereby immensely benefitting the Tiles Ceramic & Sanitary Ware Shippers from Morbi, Scrap consignees who are located in areas near to Kandla- Gandhidham complex, Imported Timber Conversion Zones in Meghpar, Commodities destined to/ originating from Kandla Special Economic Zone and other industrial clusters located in Gujarat.

At present KICT has 9 services, out of which 4 service is exclusively for coastal movement, 2 services which bring imports from the Middle East and take coastal cargo in outbound leg, NMG service operated by Transworld Feeders, Global Feeders and X-Press Feeders catering exclusively to the Middle East, Iran service by IRISL the national line of Iran and Mukalla service by Synergy Seacoast.

Hence, KICT has established itself as a preferred gateway for coastal and middle east sector in the first 36 months of its existence.